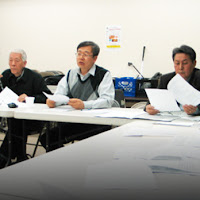 An agreement has been reached by Korean American groups on the language to be inscribed on Fort Lee's Comfort Women Memorial.

The Korean American Civic Empowerment (KACE) group released a statement Tuesday saying that a consensus was reached on the language to be inscribed on the Fort Lee Comfort Women Memorial.

The memorial, proposed by the Fort Lee Korean American Vietnam War Veterans, honors 200,000 women forced into sexual service in military 'comfort stations' by the Japanese Imperial Armed Forces, had met with resistance from other Korean American groups who did not agree on the language that was to be inscribed upon the memorial.

The Korean American Civic Empowerment organization (KACE) of Queens and Hackensack, wanted to replace "vague and inappropriate expressions" such as "sexual service" with "sexual slavery." They were also seeking to have each individual country that comfort women came from included rather than identifying them as being from "every country in East Asia." KACE is also asking that Japan's flag of the Rising Sun be removed from the design and the girl depicted be made to look more representative of all the victims.

At the April 4 meeting of the Fort Lee Mayor and Council, Mayor Mark Sokolich suggested to Nuri Han, New Jersey Program Director for KACE and representative for Comfort Women Memorials in New Jersey, that KACE meet with the local Korean American groups, get a consensus and provide the Mayor and Council with a letter stating that the groups have reached a consensus on the memorial.

"I'm not voting for anything that is not in a letter with some sort of consensus confirmed in it," Sokolich said. "You have my support as long as you have the involvement of the local Fort Lee Korean American organizations."

The committee will make a final decision on the wording on April 12th after collecting opinions on the new wording.

"For the design of the memorial, we will review all aspects of the Memorial Park of Fort Lee, where the memorial will be erected. We would like this memorial to be harmonious with the surrounding environment and the other memorials. We would like this memorial to carry the correct messages of remembering the victims of the Comfort Women system," Kim said. Also, the Korean American groups unanimously agreed to entrust the Committee with the final decision on the design of the Fort Lee Comfort Women Memorial. "Once we finalize in building consensus among Korean Americans, we will discuss details with the Fort Lee Veterans of Foreign Wars (VFW), Fort Lee Borough Council and Mayor Sokolich to make a final decision on the design and wording," Kim said. "We look forward to cooperating with the Fort Lee Government and the local Veterans of Foreign Wars group."